The Route in Detail

This is only an outline guide - you will need to use OS maps and/or or a GPS device to follow the route. We do also recommend running the route in sections beforehand to really become familiar with it. On areas of open access you can  can deviate from this specified route if your really want to, although there is no need to and we prefer it if you stick the our route as close as possible. 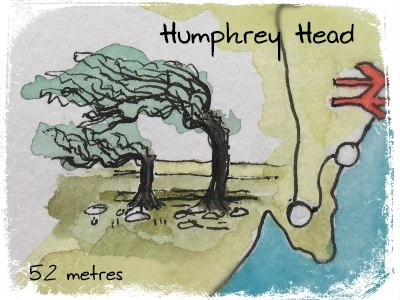 Heading South along the narrow concrete path between the railway line and the shore you will have the chance to take in the wide open expanses of The Bay. Then take a narrow grassy path close to the shore. At high tides above 9 metres this section is impassible - check tide times here. After 1.5 miles look for a stile that will allow you to cross the fence and head direct for the trig point at Humphrey Head summit although only 52 metres high you get great views. Humphrey Head is the traditional location for the killing of the last wolf in England, 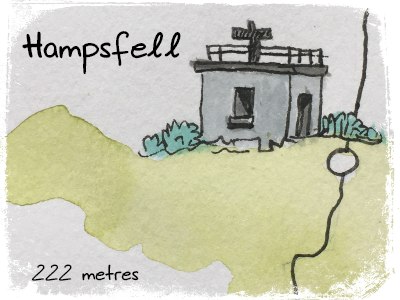 Delightful running through meadows, past the outdoor centre, under the railway line and then on to Alithwaite.Please be very careful on the main road section here  - it is a 30mph zone but still quite busy. Make sure you wear bright colours or carry a hi viz vest for this short section. Go straight ahead onto Back Orchard Road past the school, turn right onto Wart Barrow Lane. Then you are back onto meadows before another section of very quiet lanes near the Golf Club (SP1) where you start the ascent to Hampsfell - 222 metres. On the summit is a shelter and viewpoint. 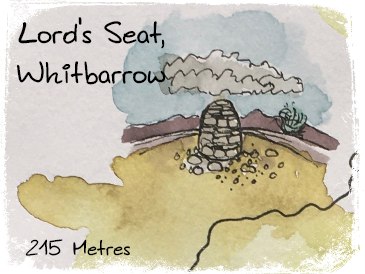 A gradual descent heading North gives some fast running whilst your legs are still fresh. The route follows tracks and fields towards Newton Fell (A ridge of volcanic rock). There are a couple of very short lane sections near Head House and Barber Green. A tunnel under the dual carriageway leads on to the old road and then lanes past High Newton Reservoir (SP2 - END OF RELAY LEG ONE) before a 1 mile descent on lanes into the Winster valley. Turn right onto a delightful path through a conservation area just after the bridge over the Way Beck  Cross another lane and continue following the line of the Way Beck through Cow Head Wood and then to a bridge over the River Winster. Shortly after there is a stiff climb through woodland before coming to Witherslack Hall. (SP3) and then you start the steep ascent of Lords Seat on Whitbarrow finishing at the Hervey Memorial which marks the summit - 215 metres. Wainright said "beautiful it is every step of the way. ... All is fair to the eye on Whitbarrow"

After the initial descent from Lords Seat you enter woodland and then emerge in damson orchards before the quaint hamlet of The Row. Further paths take to to a crossing of the A5074 (care) at the Lythe Valley Hotel (SP4), and then on through fields, old bridleways, and a couple of short lane sections with the prominent limestone cliffs of Scout Scar beckoning you onwards. Then you cross the River Pool just before Underbarrow and the Black Labrador Pub (SP5). Good running though slightly more rugged terrain leads you to Gamblemire Lane which you follow for nearly 1km before heading North to Cunswick Tarn and the rocky wooded ascent to Cunswick Scar. There are extensive views of the Lakeland Peaks from the large cairn at the top - 207 metres. 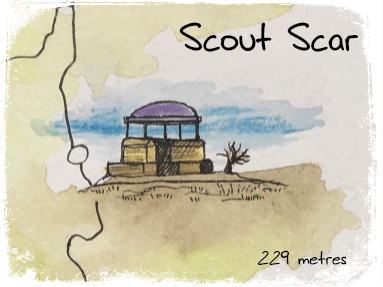 A delightful run along the impressive cliffs of the limestone escarpment. Retrace your steps initially before crossing the lane at the Scout Scar car park (SP6 - END OF RELAY LEG 2) and take the cliff edge path past the mushroom (It was built in 1912 as a memorial to King George V) and onto the trig point.- 229 metres.. Please be aware of big unfenced cliffs on your right all the way along this section 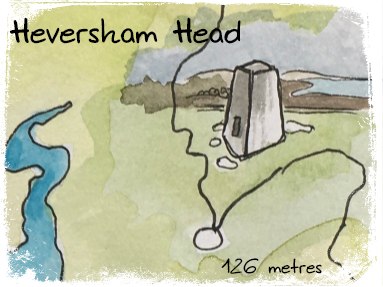 Now continue South and descend to a minor road which leads to Helsington Church (SP7), then along tracks, paths and lanes to Levens (shop - SP8). Another footpath at the South end of the village crosses the dual carriagway via a bridge and brings you to the A6 at Levens Bridge..You cross the River Kent here just opposite Levens Hall and then after 400 metres you follow a lane and then a steep Bridleway to Mabbin Hall (SP9). Follow the lane briefly and then ascend to Heversham Head trig point (126 metres). 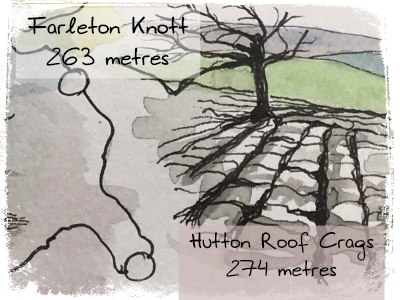 Via lanes, the Hincaster Trailway and the Lancaster Canal the next section is good going and you are now well over half way!.You have the steepest ascent of the round awaiting you and Farleton Knott starts to dominate the view ahead,You leave the canal at Farleton (SP10 - END OF RELAY LEG 3) and after passing a few houses and a path through a field you first traverse NE taking the lower paths on the junctions before swinging SE and finally West and up to the summit cairn - 263m. Please avoid the direct ascent on the loose screes.

If you can please keep to the slightly longer way around we would really appreciate it (photo)  - there have been quie a lot of people reccying the route - and that steep route will get badly erroded, particularly in wet weather. It doesn’t take much longer via our specified route so we feel it is in the best interests of the round. The land is owned by the National Trust and although it is open access I feel a responsibilty to minimise the impact of footfall.

You will now cross some of the best limestone scenery in the UK with some huge expanses of limestone pavement. To the East there are great view to the Howgills and the Yorkshire Dales. Crossing the minor road after Farleton Knott (SP11) the paths become narrow, with a few rocky sections that can be difficult in wet weather, there are a couple of right turns that are easy to miss. After crossing Uberash Plain  you reach the next trig point at Hutton Roof Crags and the highest point of the round (274 metres).

From the trig point head to a wide gate which gives access to a conservation area grazed by cattle. A long gradual descent through delightful limestone pastureland leads to Slape Lane bridleway and then a path around the edge of Burton in Kendal. Then you go through the village turing onto Neddy Hill and Station Lane which crosses the M6 and immediately on your left you follow a path across fields to arrive at the canal again (SP12 - END OF RELAY LEG 4) at Tarn Lane. A bridge over the railway leads to a lane on the left which allows you to cross the A6 (CARE) to a well hidden path on the opposite side. Please stick to the path through fields (photo) which brings you to Yealand and straight on to another path leading into ancient woodland. The paths narrow past a clearing and after two right turns and a turn to the left you ascend to a vague ridge where you need to head South to find the small mossy summit cairn of Cringlebarrow (119 metres) hidden amongst yew trees, next to a large boulder. The actual summit is seldom visited and worth checking out beforehand. View this photo There is another Victorian cairn about 50 metres before the actual summit (we think it must have been a viewpoit at one stage). Please don;t confuse the two! 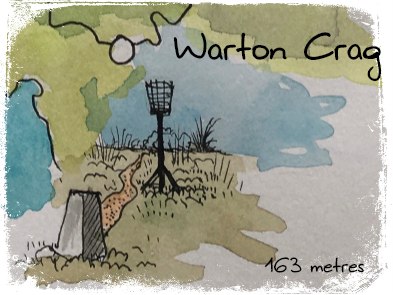 Retrace your steps to the main path and then head South through varied woodland and beautiful meadows with two short sections on lanes to arrive at a small picnic area on the edge of Warton (SP13). From here you take the steep  bridleway for a few metres before turning left onto a narrow path where you start the ascent of Warton Crag (163 metres). The trig point is the most Southerly point of the Limestone Round and the reward for reaching this point is more great views over the Bay. 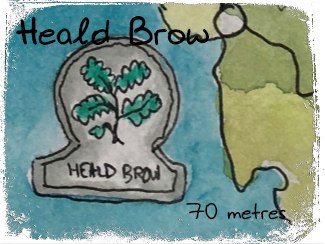 The short rocky descent from the Trig point leads down onto the Occupation Road (an old drovers track) and then a short section on the road leads take you to a left turn where you go under a low railway bridge and onto Quakers Stang very close to Leighton Moss Bird Reserve (SP14). Follow the path over high stiles (painful when tired!)  or take the slightly longer route along the embankment to a short climb and then right turn up to another small hidden summit cairn at the edge of a rocky plinth that is worth checking out beforehand - view this photo. Heald Brow (70 metres). 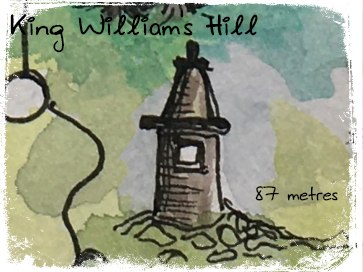 Vague paths lead from the summit until you reach the woodland and permissive path through the edge of grounds of Lindeth Manor (a few metres off to one side is the huge Giants Seat - worth checking out). A variety of paths now lead briefly along Stankelt Road before turning left to "The Green"  close to Silverdale village. After leaving Bottoms Lane at a T junction you arrive at Woodlands Bar (SP15) and on to the signposted ascent of King William's Hill (87 metres). The monument on the top is to Queen Victoria and is known as "The Pepperpot" 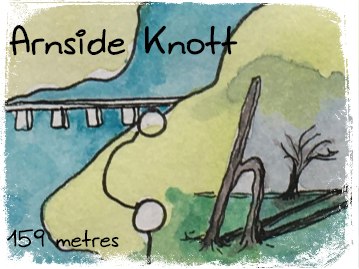 Return to the main path and descend rocky gorund and you now head past the edge of a large caravan park and to Arnside Tower, the ruins of a 14th Century Peel Tower. After the farm cross Silverdale Road (SP16)  then enter the National Trust woodland immediately turning right on a narrow path and then look for a narrow path on the left which is the start of a steep ascent of the last summit and trig point, Arnside Knott (159 metres). Arnside Knott is the lowest Marilyn (i.e. a hill with at least 150 m of topographic prominence) in England. The views are amazing on a clear day. See here for the peaks on the skyline.

From the trig point head SW and take the narrow path past the "Giraffe Tree". A glorious descent down the meadow awaits you, then onto Saul's Drive, then Redhills Road before descending to the sea front and along the shore or path to Arnside Pier.